My goodness what a year it was! While 2018 ended on a dismal note which tested investors’ resolve, 2019 ended with a bang, and investors that stayed the course were rewarded with strong investment returns.

Taking a closer look at the dichotomy between these last two years, in 2018 the Fed was still increasing rates, but in 2019 they cut rates three times! These cuts gave investors reason to cheer and made risk assets more attractive. In 2018 investors worried about the trajectory of trade tariffs while 2019 saw the promise of an easing of tariffs with China and the ratification of the new NAFTA agreement. At the beginning of last year the global economy seemed to be stumbling, but the year’s progression brought indications of an incremental improvement in Europe, a path to the end of the Brexit saga and the US economy still chugging along, albeit with a more measured pace than that of the prior year. 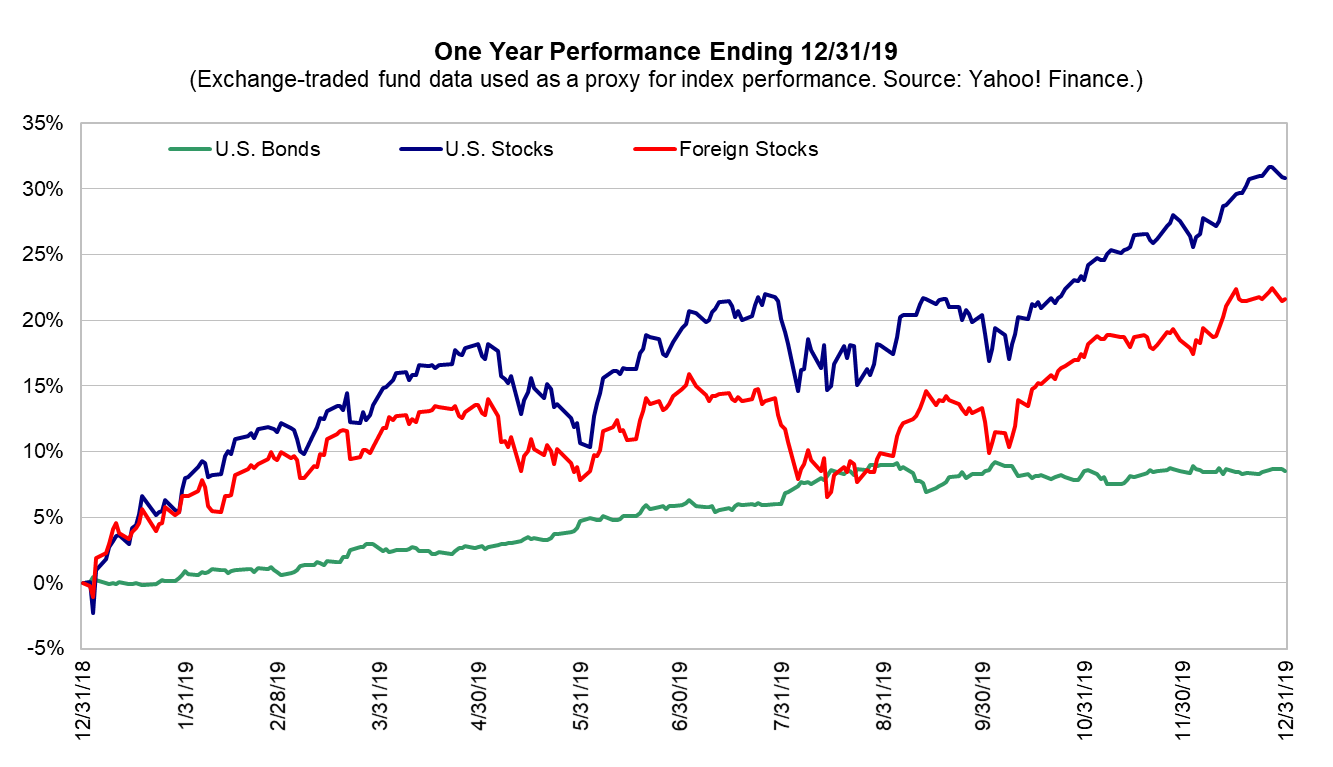 Market activity in the first portion of 2019 featured a rebound from the seemingly “oversold” condition of the prior period. The second half showed further advancement with the continued allaying of earlier fears, this despite some less than positive news about US manufacturing and business investment. Still, for large parts of the economy, growth and prosperity was the order of the day with a decent rate of growth in jobs and incomes, along with continued strength in consumer confidence.

Last year at this time we found ourselves puzzled by the mounting fears and subsequent market decline because, despite the fear and worry on Wall Street, things looked pretty good on Main Street. The economy was growing, and stocks were awfully attractive at their then discounted valuation. This year we have much the same economic news, but valuations aren’t quite as compelling. Shares of US companies are perhaps just above fair value, not surprising after such a strong year.

Nonetheless valuations are not terribly out of line and the potential for future growth in earnings does much to make the holding of those shares desirable.

As is our tradition for this time of year, we will take a couple of pages to give you a blow-by-blow of the major asset classes in your portfolio; what they have done, what we anticipate going forward, and how we have approached each. Whether you are a long-time client or a recent addition to our extended client family, we hope you will find this helpful.

Fixed income markets in the U.S. performed far better than expected in 2019. While interest rates began the year in a relatively ‘low’ range, as noted by many observers, they proceeded to fall even lower (with the bellwether 10-year treasury declining from 2.7% to 1.9%). These lower rates were in line with the Federal Reserve reducing the key short-term rate three times during the year in an attempt to stay ahead of slowing manufacturing growth, falling inflation, and as ‘insurance’ from a potentially negative global economic outcome of the U.S.-China trade negotiations.

Foreign bond markets have been characterized by a growing number of countries paying negative interest rates, which is counterintuitive to many, and appears to be a historical first. Negative interest rates you say, what are those? The central banks of many developed countries lowered interest rates during the recession just as our Federal Reserve did, but a number of those banks weren’t satisfied to lower rates to zero, instead they pushed even further into negative territory. This reduction was meant to stimulate those economies. Because their economies haven’t taken off as ours has, those negative rates have persisted in Europe and Japan.

Investing in such bonds can be difficult to understand and seems to fly in the face of traditional income strategies. Instead, we have taken a more flexible approach, allowing a broader spectrum of opportunistic holdings in both developed and emerging markets, evaluated by credit, maturity, and currency. While the emerging market component as well as the value of the U.S. dollar have been the primary drivers of fluctuations, these strategies outperformed the broader foreign bond market index overall in 2019 by a substantial margin.

U.S. stocks continued to climb a ‘wall of worry’ in 2019, sidestepping concerns about weaker economic growth and trade negotiations with China and other nations, to earn very robust returns. Leading sectors in 2019 included strong gains from technology, financials and communications; energy fell to last place, even though the sector still earned a decently positive return. Overall, the shares of small, medium and large US stocks all saw substantial gains.

Foreign stocks have underperformed domestic for several years, led by lackluster sentiment that has focused on slower economic growth in Europe and Japan, as well as the potentially negative impact from U.S.-China trade disagreements. However, this reversed towards the latter of 2019, with foreign stocks making up much of the gap. Portfolio holdings performed well.

Foreign returns were highlighted by developed market growth holdings, as well as specialized positions in international small cap and emerging markets. During the year, we adjusted holdings in the international developed large company stock part of your portfolio, emphasizing attractive value stocks.  We made some changes in developed market small company stocks focusing on high-quality, best in class firms, mostly in Europe and Japan.

Real estate investment trusts experienced a strong year, with returns of U.S. strategies similar to those of broader U.S. equities, while global REITs lagged a bit. This performance appeared to be related to the current environment of slow, yet consistent economic growth, stable tenant demand and a lack of overbuilding in many national markets. This low supply has kept inventory contained and prices higher. The segment also benefitted from a preference by many investors for lower-volatility assets, including those in the healthcare and industrial real estate sectors, in addition to lower interest rates, which eases real estate financing conditions.

Commodities experienced decent gains during the year, as the price of crude oil reversed higher from lows the prior year, due to announced production cuts and potentially stronger demand. Precious metals also fared well as investors sought out safe haven assets. Commodities continue to act as an important portfolio building block, due to their lack of return correlation with other traditional assets in the portfolio, such as stocks and bonds. This lack of correlation is derived from the often-unpredictable origin of their returns, which include geopolitical instability, weather, currency movements, and inflation.

Last year’s prognosis was classic, with stocks down 20% and nothing too terrible on the economic front it seemed quite likely that 2019 would be quite different. We would certainly not have guessed the magnitude of the year’s recovery, although we’re glad to have had it!

Looking ahead, 2020 is a bit more nuanced. Just as a house inspection considers carefully the foundation, so too it is important to look at the economic underpinnings of this new year. Overall the economy seems to be in a good place. There are, as always, pockets of weakness. We mentioned manufacturing and business investment earlier, to that we might add the seemingly ever-present weight of trade frictions. That said, the economy has continued to chug along, buoyed by low unemployment, strong jobs growth, rising wages and strong balance sheets. There seems to be no sign of recession on the horizon.

If we assume no major economic disruptions, we’re free to look at the fundamentals of the financial markets. Growth in earnings has slowed somewhat as the year has progressed and the increase in stock prices has happened a bit faster than earnings growth, elevating valuations a bit above fair value. Falling interest rates though have done much to ameliorate higher valuations as a major input to stock valuations is the level of interest rates.

One thing is for certain, this remains one of the most unloved bull markets in history and we don’t see that changing anytime soon. There are enough things to worry about that pessimistic investors will continue to have a peg to hang their hat on, even while the more bullish will be able to point to the solid but unspectacular economy as a reason for cheer.

Perhaps cautious optimism best describes our thoughts at the start of the new decade. We would not be surprised to see an increase in volatility as the year progresses. Much will depend on the economy as GDP growth and the resultant rise in corporate earnings are the fuels that propel markets to new elevations. Fiscal and trade policy will continue to play an important role.

The most important antidote to portfolio volatility is diversification, especially regarding macro allocations between stocks and bonds. This is a great time to consider overall allocations in light of income needs, other projected cash flows and overall financial planning considerations. We’ll certainly review this with you when we speak next, but if you have concerns don’t hesitate to contact us and we’ll be happy to discuss your overall positioning.

We wish the very best for you and your family in 2020, and we want to thank you for your trust in us and for your business.