Sometimes, to help understand our current situation, it is helpful to look back at similar times in the past. Each financial downturn is different, but all have common elements.

In 2000, sky high share prices led to a long and messy return to more normal valuations for stocks, especially those in the technology sector. That decline in equities was the classic deflation of an asset bubble when, all at once, investors realized that the fantastic prices paid for technology shares were just not justified. This bubble deflation was a long drawn out affair with markets generally declining for 30 months.

The financial panic of 2008, however, was not the result of stocks being too expensive, but rather excesses in other parts of the financial universe causing a spiraling collapse. Banks, brokerages and other institutions who had built balance sheets that consisted of mortgage loans and other instruments that were suddenly worth much less than they appeared, shut down. The recession spawned by this particular accounting reevaluation was long and severe and the recovery was complicated by holes in the fabric of the global financial system. The Federal Reserve and other central banks used a lot of different tools to help the recovery along. Congress passed funding and bailout legislation (remember TARP?) and, fortunately for us, they now can bring to bear some of those same programs and strategies to address our current situation.

Going back a bit further, in 1987 stocks declined by 22.6% in one day, Black Monday. The 1987 bear market was short lived, needing only three months to move from peak to trough. This one was precipitated by the proverbial “theatre fire drill” behavior when someone shouts “tire”, other folks hear “fire” and suddenly everyone runs for the exits at the same time. Once most folks were in the parking lot the realization dawned that there really wasn’t a fire after all, and people headed back in to finish the movie.

What will the eventual 2020 market decline look like? No one knows. The trajectory of this decline will depend on how quickly we can control the virus and how rapidly the economy responds when we all go back to work. As they do, markets will try to anticipate the actual events and will likely move higher once the uncertainties begin to clear.

It seems obvious, but it is worth noting that the bear markets of the last four decades caused periods of significant market decline and that all were followed by a robust recovery once the bad news that started them had been priced into people’s outlook. Each recovery was different, but all were significant in the year following the market bottom. This is so very important to your financial health that we want to reiterate that last observation. In the last three super scary bear markets we’ve had, there were substantial returns once the selling stopped.

Bear markets are built on fear and this virus creates plenty of fear to go around. As usual, at this stage of an economic downturn, folks are worried and perhaps even feel that this time is fundamentally different. Of course, it is different. The illnesses and deaths in our communities make this a particularly personal and frightening time, but from a financial perspective, it certainly has similarities to other frightening times we’ve lived through. 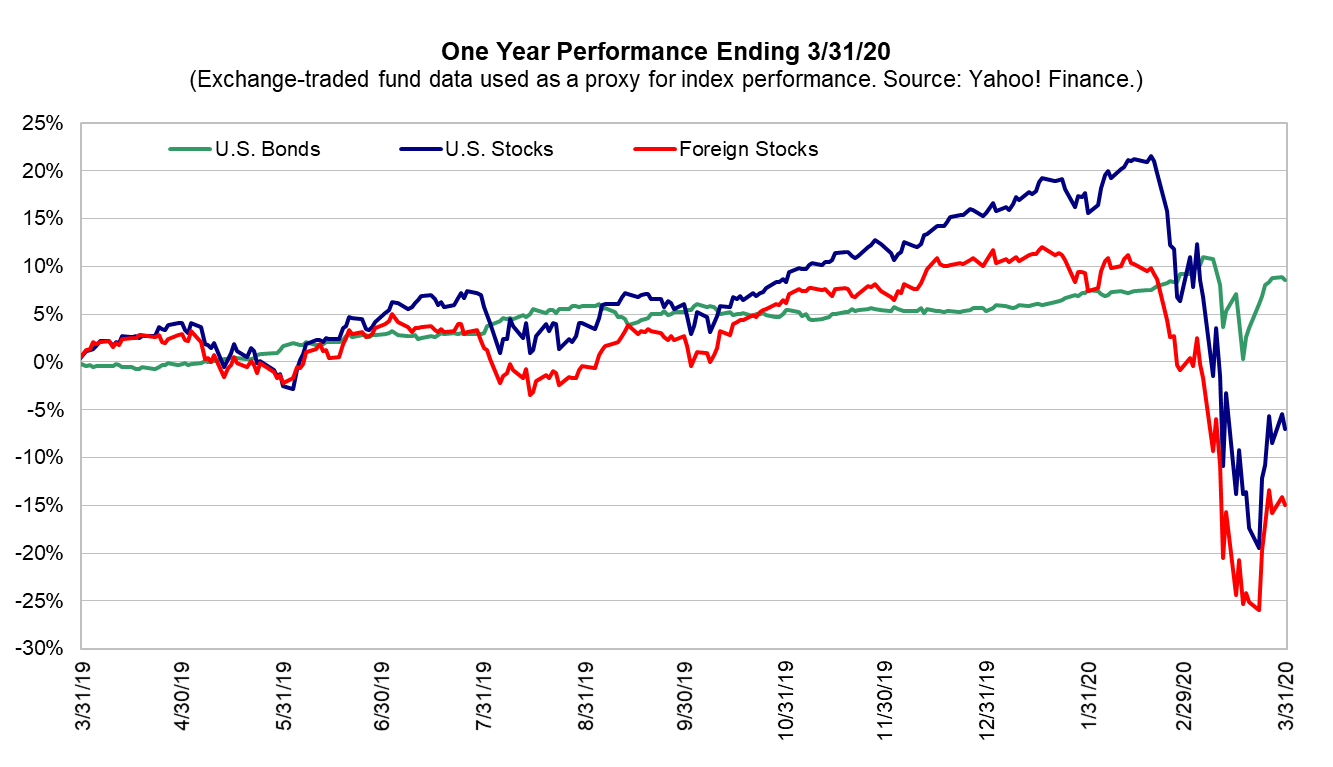 Sooner or later the curve of new cases will begin to flatten and the stay at home orders will be lifted. Folks will go back to work, businesses will open their doors and the economy will begin to get back on track. Likely somewhat before that time, investors will begin to see light at the end of this dark tunnel and will begin to tiptoe back into markets (we may already be seeing this with the recent uptick in the markets, but we may also retest the lows before all is said and done). We’ll see asset prices begin to normalize and investments look attractive once more. Very likely parts of the market recovery will be swift and substantial and, instead of running with fear in this “devil take the hindmost” sort of market, we’ll see the opposite sort of rush back into investments that folks should have just kept in the first place.

Looking back from that hopefully not-so-distant time to the present we see some extraordinary initiatives that should go a long way toward stabilization. The three stimulus plans already passed by Congress, and signed by the President, are breathtaking in size and scope and should help lots of families stay afloat while waiting for the virus to abate and the economy to improve. The Fed has also taken significantly large steps over the last month to stimulate on one hand and to ensure a properly functioning financial system on the other. The lessons learned during the financial crisis of a dozen years ago were not wasted and, having built those sorts of initiatives before, neither the Fed nor Congress wasted any time in implementing similarly large programs this time. These initiatives will help us significantly over the next several months and there is already talk of additional stimulus programs being added as we move forward.

Many economists have made a distinction between the current situation and that of the 2008 recessionary time. Banks are in good shape today, with ample reserves. While the immediate future is quite uncertain, we could begin to see economic activity begin to resume in the 3rd and 4th quarters. By contrast, in 2008 the financial uncertainty continued for quite some time and required substantial remediation for years. While it is probable that we will encounter a recession this year, and perhaps looking back will find we are already in one, many are hoping it is a short-lived affair.

The recovery beginning in China is starting to provide a little more clarity on the possible trajectory of the economic slowdown. They are cautiously reopening travel and manufacturing facilities. With many of their markets here and in other parts of the world at a standstill they will be slow to resume growth, but it is encouraging to see a glimpse of a partial return to normalcy in this otherwise unusual situation.

Market declines like this one also create some investment and planning opportunities. Each of your accounts has an investment blueprint (we call it an Investment Policy Statement) that we agreed made sense for that account. When markets change as dramatically as they have, the balance of the portfolios becomes skewed toward the investment types that have been relatively stronger. This provides the opportunity to rebalance the portfolio, selling a small portion of investments that have done well and purchasing those of asset classes that have borne the brunt of the selling. Take a hypothetical portfolio designed to hold 50% in stocks and 50% in bonds.  By early last week, the underperformance of equities would likely have shifted the balance of this account to something closer to 40% in stocks and 60% in bonds. As a result, we would then bring the portfolio back to balance by selling some of the bond holdings and purchasing discounted stock holdings. This can be helpful in enhancing returns over a full market cycle.

Times like this also make it easier to implement changes in your portfolios which have been desired but may previously have been unattractive for tax reasons. This market substantially reduced unrealized gains allowing us to make modifications to portfolios that were previously unattainable.

We would strongly encourage you to stay the course on your investment policies and remain invested during this most recent downturn. For so many reasons, we don’t think it is possible to time the market and we don’t try. Rather, diversification amongst asset classes has proven, and will continue to prove, helpful as we work our way through this. In times like these it is useful to consider just how much of your overall portfolio isn’t invested in stocks and to consider that, because of your overall diversification, you won’t have to sell stocks at their current discounted price.

As planners we understand that the straight lines of our financial plans will in reality be bent this way and that by the bull and bear markets of the future. While times like these are unsettling to say the least, our projections and advice have included provisions for these sorts of events. If you have questions about your overall planning or portfolio, we’d be delighted to hear from you.

Sooner or later we’ll be through this situation. Until then we have lots of work to do, helping those less fortunate and supporting our health officials in putting an end to this pandemic.

We appreciate your trust and confidence in us.